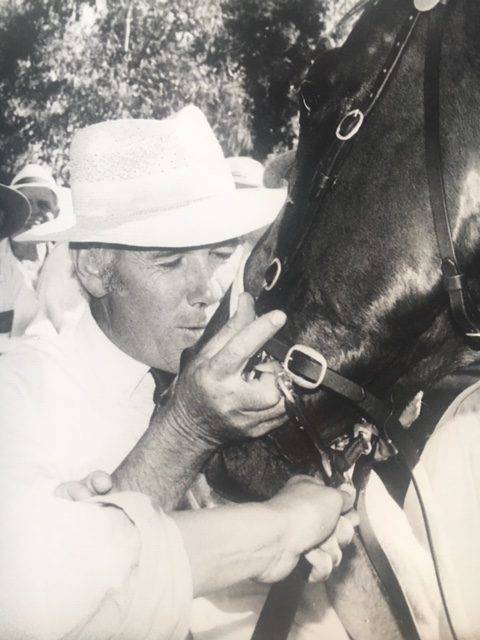 Long-time Harden trainer and owner William ‘Bill’ Spackman is being remembered as a ‘hard but fair’ operator from the old school.
The Southern District Racing Association (SDRA) community is mourning the loss of Spackman, who passed away suddenly on Tuesday, aged 72.
Spackman was well known within the racing industry, having trained on and off over a period spanning close to 30 years. His first winner was Clever Kellie in the 70s and one of his last victories was Don Filemon at Wagga in 2001.
Money Road, who won 23 races, was his greatest success and no win gave he and his family more enjoyment than his 1993 Harden Cup triumph.
“He was the pin up boy,” Spackman’s son, Scott, said of Money Road.
“He was buried in the backyard at home.”
Money Road was given to Spackman as a Christmas present by his wife, Sue, after he had picked the horse out as a yearling.
He went on to win at Wagga, Kembla Grange, Newcastle, Cootamundra, Gundagai, Young, Narrandera and Grenfell. He was also placed a couple of times at Randwick.
Among Spackman’s other best horses were Merry Punta, Strictly Family, Don Filemon, Princeton Prince and Bay Of Dreams.
A dairy farmer, Spackman moved to Wagga to train full-time in the late 90s before moving back to Harden. He also spent time at Berrigan and Katamatite.
Not only did he enjoy his own success in racing, he is responsible for his sons Scott and David, and nephew Chris Heywood, all going on to become trainers.
“If it wasn’t for him, we probably wouldn’t be in it,” Scott said.
Spackman provided both his son Scott (Money Road) and Heywood (Little Hegemony) with their first wins as riders.
Heywood paid tribute to his uncle.
“We wouldn’t have got into racing without him,” Heywood said.
“He got us into it. He educated us and taught us to work.”
David said even though his father had got out of racing in recent times, he still followed it closely.
“He was a good fella. Hard but fair,” David said.
Spackman is survived by his wife Sue, his children John, Scott, David, Kellie and Paul, along with their families.
A private service will be held at Harden Lawn Cemetery.