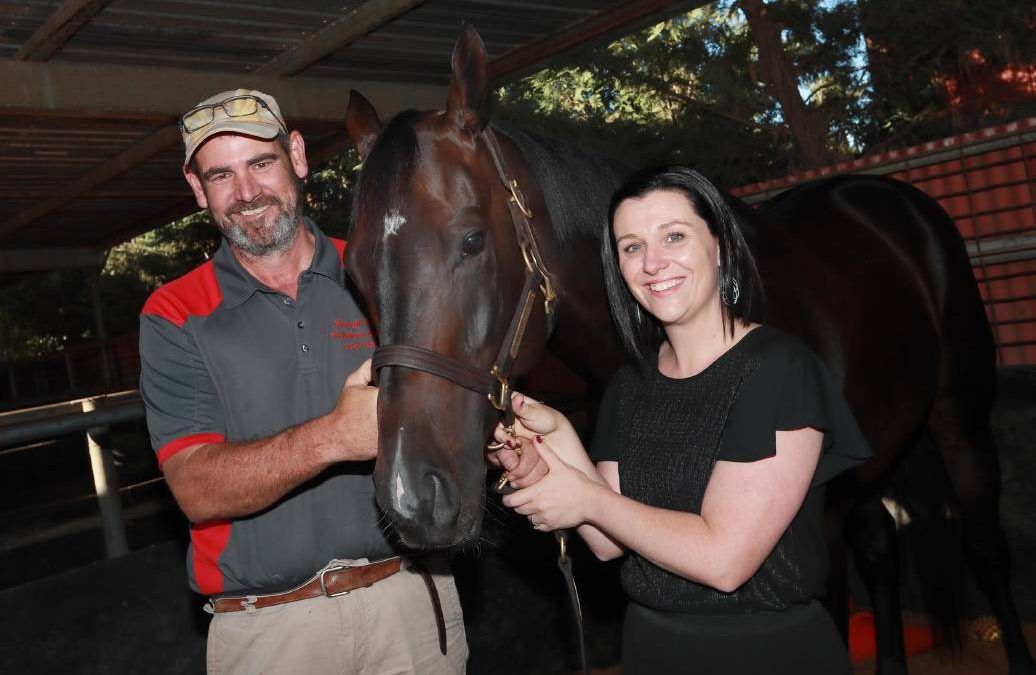 If the Wagga galloper Blitzar can find his fourth career win on Saturday, a group of owners from around the state will be leaping for joy. And George and Amy Carroll will be among them.

Trained by Chris Heywood, Blitzar can virtually double his prizemoney in one run with a winning finish in the feature race at Murrumbidgee Turf Club.

The Newhaven Park SDRA Country Championships Qualifier (1400m) is worth $150,000, with half of it going to connections of the winner.

Just as exciting for owners of the first two placegetters is a trip to The Championships at Royal Randwick and a shot at the rich country final.

The trainer is carrying confidence. Heywood was pleased with Blitzar’s strong finish in last week’s Preview at Wagga, for a second behind Lady Brook, and nothing this week has changed his view of the horse.

Blitzar will have to overcome barrier 12. But the favourite (Another One) is only two inside him and the second favourite (Oamanikka) two further out.

“It is what it is. We’ve got to deal with it. Everyone’s got their own problems. We’ve got ours. We’ll just deal with them,” Heywood said.

Brock Ryan takes the ride after Tyler Schiller instead leapt to Lady Brook, trained by his old boss Phil Sweeney. But blinkers will go on Blitzar.

“I’ve had them up my sleeve all along. It was a difficult decision to make whether to put them on or put them off but I just think they’ll give him that added advantage,” Heywood said.

In 13 starts, the four-year-old has had five minor placings as well as three wins.

He hasn’t been further than 1300m but the trainer is confident. So’s George Carroll after what he saw trackside of last week’s powerful finish over 1200m.

“He’s just doing everything we want him to do this preparation. We’ve changed a couple of tactics and it seems to be working very well.”

Despite a family background in trotting, he started ‘dabbling’ in racehorses about three years ago. Blitzar ensured he’s got the bug.

“Yeah, he’s real good. He’s got some good breeding (by Deep Field). He’s won a few races and I’ve got to know a few blokes from Dubbo who are in on it,” he said.

Carroll won six senior premierships as a footballer at Ganmain-Grong Grong-Matong and CSU.

“The footy was a bit harder, a bit more training. The horse is doing all the training now,” he laughed.

“But this is a good thrill. I really do enjoy it. And this is a great day, the Country Championships. Great for Wagga.”

“It’s good fun. It’s been great going up to Sydney and experiencing different racecourses. And it’s something we’re in together,” Amy Carroll said.

For Heywood, sharing the enjoyment is half the fun.

“Some of them are mates I’ve known for years and they’ve had mates and we’ve just all hooked in and we’re in it together. We’ve had a good time.”

Heywood himself goes in with good form. He’s had five wins and six placings from his last 24 runners.

Blitzar is one of seven runners the stable has in at Wagga on Saturday, including Landmine, Pillar of Strength, Corazon De Oro and Duck Egg, a first starter which the Carrolls also have an interest in.